Mission Statement: A Center of Christian-Muslim Engagement for Peace and Justice (CCME) at the Lutheran School of Theology at Chicago (LSTC) fosters and deepens relations between Christians and Muslims as a significant part of its larger purpose of building bridges of mutual understanding, respect and cooperation among people of all faiths.

Vision: CCME was founded on the conviction that Christians, Muslims, and neighbors of other faith traditions, in their co-humanity, created by and responsible before God, are called to know, respect and learn from one another, despite or even because of our differences.

Sara Trummserves as the director at A Center of Christian-Muslim Engagement for Peace and Justice (CCME) at Lutheran School of Theology at Chicago.  Although she grew up in a seemingly mono-cultural Minnesota town, she is thankful to have had many educational and social experiences to guide and expand her worldview.

She received a BA from Augsburg College, an MA from Luther Seminary, and served at the Henry Martyn Institute in Hyderabad, India. Her work at CCME began as program coordinator in 2008, and she is continuously amazed at how the interfaith community in Chicago enhances and challenges her faith, as well as creatively collaborating for peace and justice for all. Sara became a Community Ambassador through Interfaith Youth Core and is a Qualified Administrator for the Intercultural Development Inventory.

He is one of four members of the Editorial Board of the monograph series, "The History of Christian-Muslim Relations" (Brill), a member of a team producing a three-volume set, The Popes of Egypt (Cairo and New York: American University in Cairo Press) and is presently at work on Volume Two, The Coptic Papacy in Islamic Egypt.  He serves as Christian Arabic "Language Leader" for the multi-volume project, Christian-Muslim Relations: A Bibliographical History (Leiden: Brill, first volume to appear before the end of 2008) and is a member of the Editorial Board of the journal Coptica (Los Angeles).

Carol Schersten LaHurd lives in Chicago where she serves as adjunct professor at the Lutheran School of Theology at Chicago. From 2006-2010 she was coordinator of the Middle East peace-making campaign of the Evangelical Lutheran Church in America (ELCA). She has taught biblical studies and Islam. She received the M.A. in English Language and Literature from the University of Chicago, and the Ph.D. in Religious Studies from the University of Pittsburgh and Pittsburgh Theological Seminary. With her family she has lived in Damascus, Syria, and Sana'a, Yemen, where she taught English as a second language and did research on women in Islam.

Dr. LaHurd has published numerous scholarly articles and book chapters on biblical and interfaith topics. Carol LaHurd has deep and extensive experience in inter-religious and ecumenical work. She has been co-chairperson of the Muslim-Christian Relations Committee of the Minnesota Council of Churches, chairperson of the Ecumenical Affairs Committee of the Minneapolis Area Synod, member of the ELCA Peace Task Force (to draft the 1995 social statement, “For Peace in God’s World”), and member of the North Carolina Synod Ecumenical Affairs Committee. Dr. LaHurd served on the Board of the ELCA Division for Global Mission from 1997-2003. Currently she is active in adult spiritual formation at Holy Trinity Lutheran Church in Chicago. 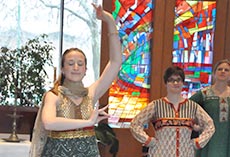 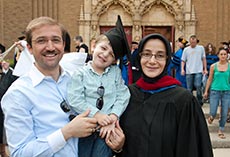